We and our partners use cookies to Store and/or access information on a device. We and our partners use data for Personalised ads and content, ad and content measurement, audience insights and product development. An example of data being processed may be a unique identifier stored in a cookie. Some of our partners may process your data as a part of their legitimate business interest without asking for consent. To view the purposes they believe they have legitimate interest for, or to object to this data processing use the vendor list link below. The consent submitted will only be used for data processing originating from this website. If you would like to change your settings or withdraw consent at any time, the link to do so is in our privacy policy accessible from our home page.

If you have watched combat sports of any kind, you will notice that the athletes are quite exposed. Often, you can see them wearing nothing but shorts but do you find yourself asking – do MMA fighters wear underwear?

MMA fighters wear underwear beneath their shorts alongside a jockstrap or a protective cup. The shorts are of compression variety and serve as protection against exposure and errant kicks. Fighting without such protective gear is considered a risk.

In this article, we will cover the different protective measures MMA fighters take to protect their groin area during bouts and sparring.

MMA underwear often comes with a pre-fixed cup to cover one’s groin, but it is reasonable to wonder why this is necessary when striking the groin is obviously illegal in the sport. There are a few reasons for this.

First of all, one has to account for unintentional strikes. Especially when a Brazilian Jiu-Jitsu practitioner has someone in a guard and is primarily using his legs to control the opponent, the opponent may retaliate by thrashing around the region and striking the BJJ practitioner’s groin.

The second major reason to involve protective gear is the vendetta that can sneak into the ring. Though most MMA fighters are consummate sportsmen with a deep respect for their opponents, the marketing trash talk that happens before an event can cause personal animosity.

As a result, one can possibly get too antagonized and decide to throw away their career but deal permanent damage to the opponent in the process. To avoid making such strikes possible, both fighters are made to wear protective equipment. After all, you go to great lengths to protect your head up top, so why not your head down below!

In the traditional definition, an underwear is a garment worn underneath one’s clothes. For MMA, we will cover any protective apparatus under the fighter’s shorts under the title of underwear. Below are the top three to consider.

These are the most basic level of protection and are usually used by runners and sometimes by fighters as well. Compression shorts are like the sports bra for the genitalia. They hold one’s genitals close to their body because of the elastic fabric in their build.

While compression shorts can help avoid rogue kicks from accidentally hitting the groin, they provide little protection in the instance that the groin does become a direct target for a kick, elbow, or punch.

Athletic cups are used by almost all professional MMA fighters. These cups are made of hard protective material that can guard against direct, intentional strikes. As Murphy’s law dictates: what can go wrong will go wrong. And prizefighters don’t want to take chances.

Athletics cups are essentially just cups, so they don’t have any adhesive mechanism. That leaves you with two options: either invest in underwear that comes with a cup pre-attached or have a cup fixed with your jockstrap for optimal comfort and security. Either way, having a cup is better than fighting without one.

How to Avoid Strikes to the Groin

You have probably heard the saying that prevention is better than cure. MMA fighters believe this and avoid giving openings for risky strikes to their opponents. Below are some of the best practices you should consider to avoid getting hit in the groin.

Control the Opponent From Behind

You may notice that most mobility in striking is towards the front. If you have the opponent in a guard where even one of his hands is free, and you’re in the front, you can expect to be bombarded with countless jabs. When you control the opponent from behind, you risk taking elbows to your jaw (so have a mouthguard), but you reduce the risk of getting hit in the groin with full force.

Adjust Your Stance for Better Protection

This is a bit tricky because you need to have a wide stance for balance, but if your legs are wide enough apart, a kick meant for your core can easily hit your groin or your inner thigh. Make sure that your legs are only as far apart as you need them to be and that you are not in your opponent’s striking range without a defense trained against kicks.

More often than not, you will realize that the fighter you are up against has treated his opponents quite consistently. By looking at their history, you can understand whether you can trust them to follow the rules and to try their best not to get engaged in foul behavior. If your opponent has a history of fouls, you may want to opt-out of the fight.

There’s also another reason to know your opponent. You want to know their fighting style in general. Certain styles (like kickboxing) have a higher inherent risk of groin hits, while pure boxers don’t pose the same risk. Brazilian Jiu-Jitsu can lead to errant strikes as well.

Things to Keep in Mind When Purchasing an Athletic Cup

If you have decided to invest in your personal protection by getting an athletic cup, you need to make sure of a few things before making the purchase, so you are satisfied with the cup you end up buying.

Get the Right Size

If you buy a cup that is too big for you, it will move around as you fight and distract you during the bout. On the other hand, a cup that is too small will be extremely restrictive and uncomfortable, tempting you to even tap out just so you can go to the locker room and remove the painful contraption.

Get the Right Material

Athletic cups come in various materials, including plastic and steel. You have to make sure you don’t have an allergic reaction to the material and, more importantly, that the material is actually legal according to the rules and regulations of the federation or the gym under which the bout is happening.

Know How the Cup Fits

How to Take Care of Your MMA Underwear

Whether you invest in compression shorts or purchase a cup for protection, you have to take care of your purchase to avoid wear and tear to the material.

Make sure you do not pop the underwear in with the rest of the laundry because the last thing you want is the elasticity of the fabric being affected by hot water or rough spinning. Wash the underwear by hand, preferably right after use, and let it air dry. Keeping your gear free from odor and shrinkage is key to longevity – the same is right for your BJJ gi and belt.

Have at Least Two Jockstraps/Cups

While you are not obligated to change your jockstrap after every bout, you want to have at least two in case one’s cup or jockstrap is damaged, and you have a sparring session or a match coming up. To avoid having to scramble for a replacement or risk going into the fight without protection, always keep one pre-measured protective underwear where it is accessible.

If you step into an MMA bout, you should make sure that your groin and genitalia are sufficiently protected against unintentional kicks, jabs, and thrashes. For this, you should get an athletic cup or at least a jockstrap that provides a layer of protection while holding your genitalia closer to your body. 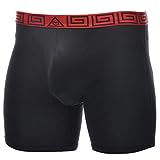